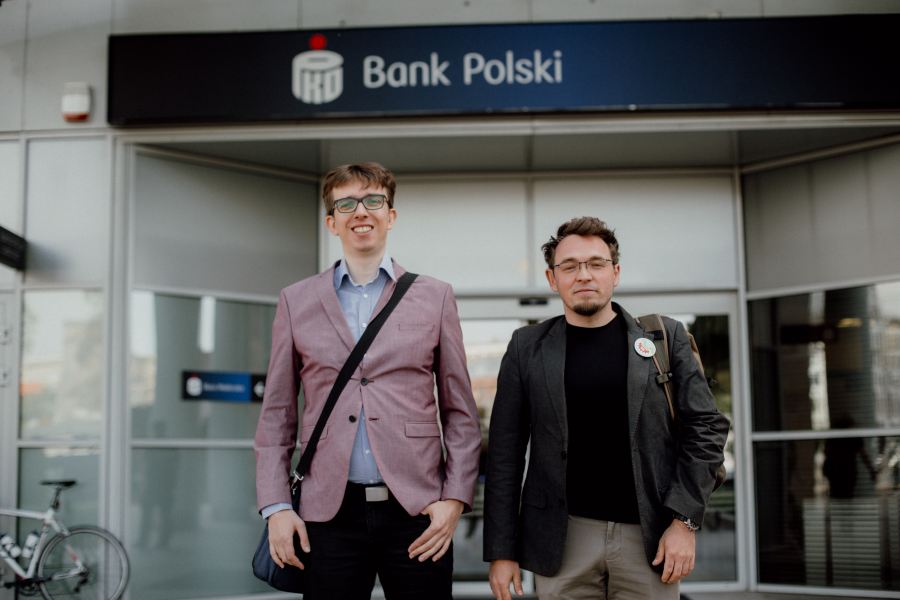 This year’s Annual General Meeting of shareholders of the PKO BP bank was held on 12 May 2022.

The event was attended by minority shareholders who asked questions to the bank's Management Board on behalf of our foundation.

In response to our questions about the bank's approach to the coal and gas power sectors, the bank refused to specify the dates for the end of their financing. It also does not specify conditions for companies that do not have a roadmap to climate neutrality.

– Although PKO BP declares its support for green energy, it still chooses to continue financing the fossil fuel sector, contrary to market trends. It is surprising that, while avoiding declaring a date for achieving climate neutrality, the bank calls this approach pragmatic. – remarks Jan Chudzyński, financial specialist of the RT-ON Foundation.

– This disappointing approach is called pragmatic by representatives of Poland's largest bank and is motivated by the need to take into account the geopolitical situation, in particular Russia's aggression against Ukraine. In fact, it is difficult to read this as anything other than an attempt to explain the irresponsible attitude of the banking sector leader in the context of climate change. – adds Jan Chudzyński.

Below are the questions, together with the responses of the bank's management:

1. According to a research by the British Standard Chartered Bank, more than 60 per cent of investors will not invest in companies that do not have a roadmap to climate neutrality. The 2021 Management Report on the operations of the PKO Bank Polski S.A. Group of Companies refers to the adoption of indicators in the ESG area. But no mention is made of climate neutrality targets, neither in terms of Scope 1 and 2, nor in terms of Scope 3.

Has the PKO BP bank declared a climate neutrality date in any of these scopes and a pathway to get there?

The Bank adopted a number of ambitious ESG targets last year without declaring a date for achieving climate neutrality. The Bank has opted for a pragmatic approach and intends to consistently take a number of deliberate measures. Initially, it started counting the organisation's carbon footprint, then adopted short-term, ambitious targets for reducing its own emissions (implementation underway) and began work on counting the emissions of Scope 3. Counting the full emissions in Scopes 1, 2 and 3 will be the basis for formulating further medium- and long-term targets.

2. The Management Report contains preliminary estimates of greenhouse gas emissions for Scope 3. Do you have any estimates of the change in emissions within this scope, but more broadly than just business trips and employee commuting?

It is about issues related to the bank's loan portfolio, by far the largest and main source of emissions related to the activities of financial institutions. This is even several hundred times more than Scope 1 and 2, and it is in this scope where climate neutrality should be mostly aimed for.

The Bank has started work on the measurement of Scope 3 emissions and will be ready to disclose them by the date to be adopted in the implementing standards for the disclosure of prudential information on ESG risks under Article 434a of the CRR.

3. Referring to the Scope 3 emissions estimates.

Has PKO BP identified or is it planning to identify funding restrictions for companies that do not themselves have a designated path to climate neutrality?

Is the Management Board not concerned that the lack of such a strategy in the companies financed by the bank will make it difficult to plan a path towards neutrality for PKO BP?

Currently, the Bank does not set rules to limit financing for companies that do not have a designated pathway to achieve climate neutrality. However, the analysis of ESG factors is taken into account in the lending process for corporate clients, especially for higher-risk industries, in terms of negative environmental impact. The Bank then takes steps to obtain additional information from such a client, e.g. regarding its ESG strategy, emissions reduction plans, etc. These activities allow informed lending decisions to be made on the basis of a broad spectrum of information.

At the same time, the Bank is keeping abreast of the legislative work related to the implementation of the reporting requirements for companies (including the Bank's borrowers) to comply with the conditions of the taxonomy.

4. The 2021 Management Report on the operations of the PKO Bank Polski S.A. Group of Companies refers to the adoption of indicators in the ESG area, including information on PKO BP's commitment to eliminate exposure to the coal mining sector by 2030. There is also information that the sector's share of funding has fallen to 0.13% of the bank's total assets.

Is there a similar provision setting a date for the elimination of exposure to the coal power sector? If not, can it be expected? What is the bank's current exposure to the sector?

The Bank does not currently set a date for the withdrawal from coal power financing, as it takes into account the need to stabilise the situation on the market of energy resources, which are of key importance for the functioning of the Polish economy and society. In addition, the current geopolitical situation, including the Russian-Ukrainian war and its direct consequences such as, for example, the shutdown of gas supplies to Poland or plans to reduce oil imports from Russia, force a far-reaching caution and consideration of energy market strategies currently being formulated both in Poland and at European Union level.

At the same time, we emphasise that, in line with the High Carbon Energy Financing Policy adopted in 2019 and significantly tightened a year later, the Bank is not interested in financing new coal-based sources of power and heat generation and assumes a gradual reduction of its existing involvement. Coal-based investments can be financed, provided that the funds are earmarked for upgrading purposes to meet environmental requirements, in which case there is an obligation to precisely specify the purpose of the funding and to control the use of the funds.

The level of exposure to the mining sector is reported on an annual basis.

5. There is no information in the Management Report on the policy towards gas and oil production and the gas power industry. Does PKO BP plan to set a pace or a date for PKO BP to fully terminate its financing of these sectors?

Given the current geopolitical environment, until the situation in energy resources, which are of key importance for the functioning of the Polish economy and society, stabilises, the Bank does not plan to take such actions. At the same time, it is heavily involved in financing green investments, thereby supporting climate neutrality. The drive for green funding is reflected in the established ESG targets, as was presented in the 2021 Non-Financial Information Statement.

We received the answers from the Management Board of PKO BP in writing by email: 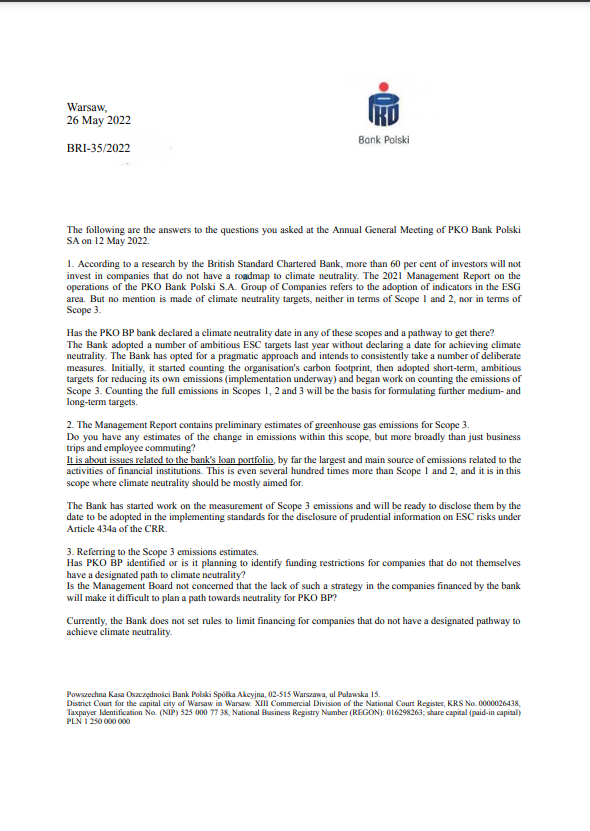 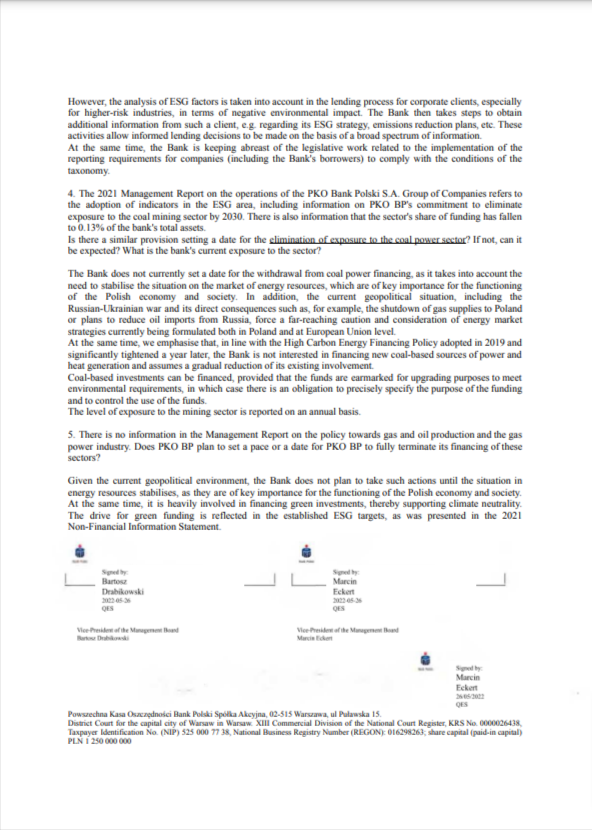 A recording of the general meeting can be found at the link below:

Here you can see the photos from the event: