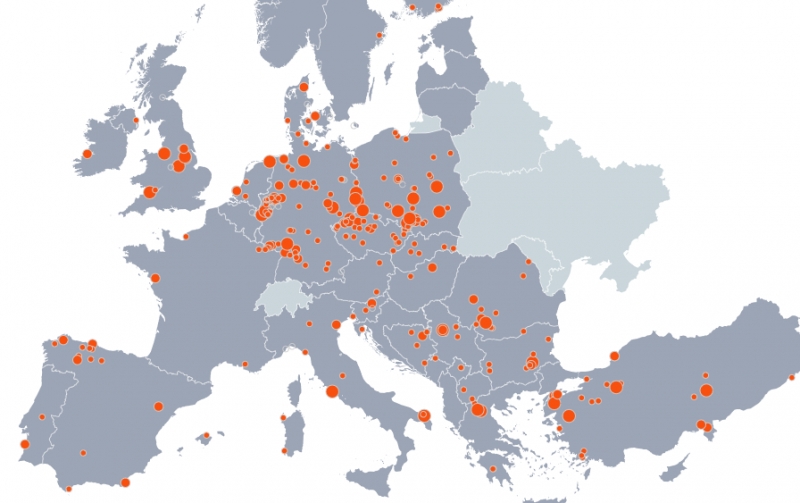 Lucie Pinson, European coordinator of Unfriend Coal, said: “When the world’s governments gather for the UN climate summit in Katowice this December they will be breathing some of Europe’s most polluted air. Delegates should remember that coal companies are only able to poison the air and undermine climate targets because insurers like Talanx, VIG, UNIQA and PZU are willing to underwrite their activities.”

Since February, when Unfriend Coal’s Dirty Business report highlighted insurers supporting Poland’s coal industry, Allianz, Generali and Munich Re, have all pledged to stop insuring new coal power (Munich Re just in industrialised countries). All three have been major underwriters of Polish coal, so it is a significant blow to the industry and limits the pool of companies willing to insure the construction of the planned 1000MW Ostroleka C plant. However, Talanx, UNIQA and VIG have made no such commitments and Unfriend Coal understands the Austrians have bid to insure Ostroleka.

Unfriend Coal has now identified at least 33 contracts worth more than €250 million signed since 2013 to underwrite new and existing coal mines and power plants, in research which updates figures in Dirty Business. Talanx’s subsidiary Tuir Warta and Munich Re’s subsidiary Ergo Hestia have each insured 17, Polish insurer PZU has insured 16, and Allianz and Generali 13 each. UNIQA has signed 5 and VIG’s subsidiaries Interrisk and Gothaer Poland 2 each.

Talanx, PZU, Munich Re, Allianz and Generali are underwriting the biggest power plant under construction in Europe, an 1800MW expansion at Opole due to start operating in 2019. The same five also underwrote construction of a 1075MW new unit at Kozienice which was completed in December 2017. The contracts were signed in 2014 and 2013.

Unfriend Coal is releasing its latest research as a new campaign calls on the public to put pressure on insurers and banks still supporting coal projects and companies three years after the Paris Climate Agreement. It highlights the impact of the Turow power plant, in a video hosted on the Europe Beyond Coal website: beyond-coal.eu/finance.

Coal is the biggest single source of CO2 emissions. No new coal plants can be built and at least 59% of all coal power must be phased out by 2030 to meet the Paris climate target of limiting global warming to 1.5C, according to the latest report from the UN’s Intergovernmental Panel on Climate Change.1 The International Energy Agency also warned last week that the world cannot meet the Paris target if it builds new polluting fossil fuel power plants. “We have no room to build anything that emits CO2 emissions,” said executive director Fatih Birol.2

Emissions from Poland’s coal power industry contributed to an estimated 2,597 premature deaths across Europe in 2016. 3 The country is home to 33 of Europe’s 50 most polluted cities: in Katowice, where the CP24 climate summit opens on December 2nd, average particulate levels are more than three times the World Health Organisation limits.4

Kuba Gogolewski, from the Polish NGO Foundation “Development YES Open-Pit Mines NO”, said: “Polish companies are pressing ahead with aggressive development plans despite growing evidence that new coal plants will lose money. This shows they care little about tackling climate change, protecting public health, or acting in the best interests of shareholders.”

Attention is now focusing on the 1000MW Ostroleka C unit, which Polish state-controlled utilities Energa and ENEA plan to build at a cost of €1.2 billion. The plant is due to operate from 2023 until 2063, far beyond the timeline for phasing out coal in line with the Paris Agreement.

Meryam Omi, head of sustainability and responsible investment at Legal & General Investment Management, an investor in Energa and ENEA through an index-linked fund, said they had “serious concerns” about the project. “Our clients are exposed to very high financial risks due to its uncertain financial support, rising carbon prices, unreliable capacity payments and threat of new technologies in energy generation,” she said.5 Environmental lawyers ClientEarth are suing Enea on the grounds that the unit poses an “indefensible” financial risk.6

The financial think tank Carbon Tracker has found that that more than half of EU coal plants are already loss-making, and the falling cost of renewables, tougher air quality standards, and rising carbon prices will push this up to 97% by 2030. 7

This June global investors with $30 trillion in assets called on governments to take urgent action to implement the Paris Agreement, including phasing out coal power in Europe and OECD countries by 2030 and worldwide by 2050.8

Kuba Gogolewski This email address is being protected from spambots. You need JavaScript enabled to view it. +48 661 862 611

Will Aitchison This email address is being protected from spambots. You need JavaScript enabled to view it. +44 (0) 7412 872453

The Unfriend Coal campaign brings together a global network of NGOs and social movements calling for insurance companies to divest from and cease underwriting coal and support the transition to clean energy. The campaign is supported by 350.org, CIEL (US), ClientEarth (UK), Foundation Development YES – Open-Pit Mines NO (Poland), Friends of the Earth France, Greenpeace Switzerland, Market Forces (Australia), Rainforest Action Network (US), Re:Common (Italy), The Sunrise Project (Australia), Urgewald (Germany) and the Waterkeeper Alliance (US), among others.

Allianz, Europe’s second largest insurer, committed in May to rule out insurance support to new and existing coal projects. CEO Oliver Bäte said: “Allianz wants to cut the biggest climate killer out of the core business over time. We are getting even more serious on global warming.”9 However, Allianz’s policy only applies to cover for standalone projects and still enables it to insure coal mines and power plants as part of a package of projects.

Munich Re, the world’s second biggest reinsurer, announced in August that it will stop insuring new coal projects in industrialised countries. CEO Joachim Wenning wrote last year: “On behalf of future generations, we should be making every effort to reduce CO2 emissions. After all, the lower we keep the rise in global warming, the less severe the consequences will be for everyone.” 10 However, industrialised countries account for less than 8% of planned new coal capacity globally. Projects in Poland and elsewhere can also still secure reinsurance because Munich Re’s policy does not apply to treaty reinsurance, where a reinsurer accepts all risk of a certain type.

Generali, Europe’s third largest insurer, announced this month that it would stop insuring new coal projects but would continue to underwrite modernisation and retrofitting of existing plants. It said it would stop accepting coal companies as new clients and would stop insuring six existing clients’s coal activities if they failed to come up with a credible plan to transition to low-carbon activities. Group CEO Philippe Donnet has said: “Protecting the environment and adopting effective actions to tackle climate change are central issues for Assicurazioni Generali.” 11

4 World Health Organisation: Most polluted cities and towns in the EU. The WHO annual guideline limit for fine particulate matter (PM 2.5) is 10 μg/m3. The annual average in Katowice is 35 μg/m3.