White bears and coal under PZU headquarters. Why did they protest? 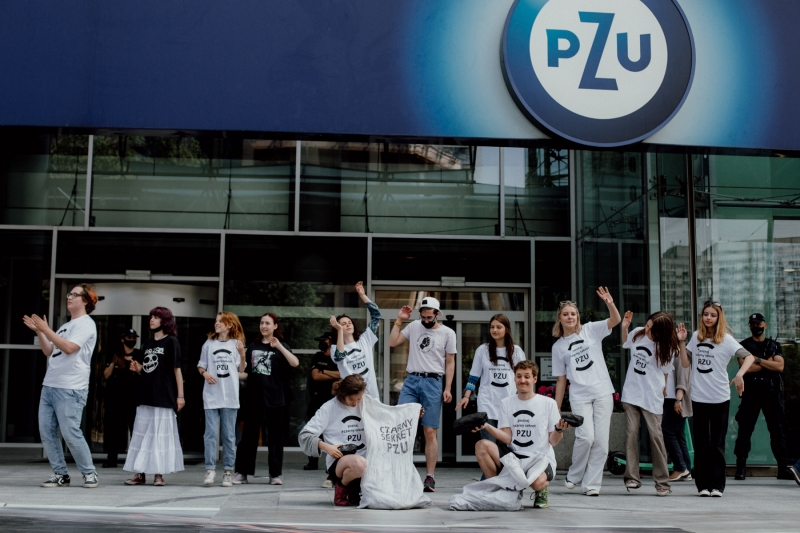 On June 16, there was a protest of non-governmental organizations and climate movements held in front of the headquarters of the largest Polish insurer in Warsaw (Extinction Rebellion, Rodzice dla Klimatu/Parents for Future, Młodzieżowy Strajk Klimatyczny/Fridays for Future, Strajk dla Ziemi/Earth Strike). Three individuals who are also minority shareholders of PZU participated also in the General Meeting of Shareholders. They demanded that PZU should follow the example set by the largest global and European insurance companies [1] and thus resign from insuring coal mines and power plants. This is one of the simplest and most effective ways to fast-track the energy transition. If by 2030 there is no one to insure coal in Poland, it will become obvious that the transition should be planned today and carried out quickly, rather than postponed.

The protest started at 10 a.m. in front of the building at Jana Pawła II Avenue. On the sidewalk, there was a model resembling an open-pit mine that was supposed to make the inhabitants of Warsaw aware of the dark side of PZU’s activity. There was also a white bear with a thought-provoking sign that claimed PZU is responsible not only for insuring the harmful to the environment coal but also for sponsoring activities causing extinction. The protesters danced and sang, encouraging the PZU employees to support the fight for climate and make the right decisions about our future. There were also many speeches with the aim to raise awareness about PZU’s role in propelling the climate crisis.

Marzena Wichniarz from Rodzice dla Klimatu (Eng. Parents for Future) was one of the speakers:
“PZU carries 200 years of history and experience in the financial and insurance markets. This fact alone inspires great confidence in such an institution, associates it with stability and predictability, and creates a sense of responsibility among those looking for ways to secure their future. However, there is a dirty, dark side to PZU that is rarely heard or talked about, but which is crucial to our and our children's future. It is the coal sector; mines and power plants, for which PZU stands as the financial guarantor and an ally, that determines their strategy. And that strategy, in the face of ongoing climate change and global climate policy, should take a decisive retrograde course, seeking to end fossil fuel extraction immediately and reduce greenhouse gas emissions as soon as possible."

Jakub Kocjan from non-governmental organization Akcja Demokracja spoke about a petition in which Internet users sign an appeal to PZU. In the petition, they demand that PZU withdraw from insuring new and already operating coal-fired power plants and coal and lignite mines.
Piotr from Młodzieżowy Strajk Klimatyczny/Fridays for Future pointed that “climate catastrophe will affect all of us, which is why it is so important that we all take up the fight. Large companies like PZU are a very important part of it. If they fail to take decisive actions for the climate, they hold back the changes that we need so much.”

Kuba Gogolweski from the foundation Development YES – Open-Pit Mines NO and Marta Czarnocka-Cieciura and Patryk Kowalczyk from the Extinction Rebellion movement also participated in the General Meeting of Shareholders. The Board answered their questions, however, the responses were not satisfactory.
Kuba Gogolewski: “The PZU Board runs away from the responsibility, claiming that it is not their role to influence the companies they invest in and insure. It is a very narrow understanding of climate responsibility, which is already understood by all the other large insurance companies in Europe. A day before the General Meeting of Shareholders, PZU Legal and General Investment Management informed [2] about the sale of AIG shares, which is one of the largest insurance companies in the United States. The reason for this sale of AIG shares was that the American insurer did not have a policy determining the insurance regulations for the thermal coal sector.
Gogolewski adds: "The company's management also stated that it is not able to publicly disclose the share that premiums from the coal, gas and oil extraction and combustion sectors represent of total insurance premiums. We were informed that in 2020 the risk of lawsuits resulting from climate lawsuits against high-carbon customers was not analyzed. PZU defined the share of coal companies as marginal, but remaining at a similar level in 2020 compared to 2019. PZU's strategy is not to take actions that could expose PZU to the loss of short-term profits from insuring and investing in the extraction, transportation and burning of fossil fuels."

Patryk Kowalczyk: "PZU is acting like a drug dealer who, out of concern for the health of children, starts handing out carrots to them, yet continues to sell them meth. We have been assured about insuring green energy, but there are still no specifics about stopping insuring the fossil fuel sector. It is very disappointing that a company that is supposed to care about health and life still wants to insure a climate disaster."