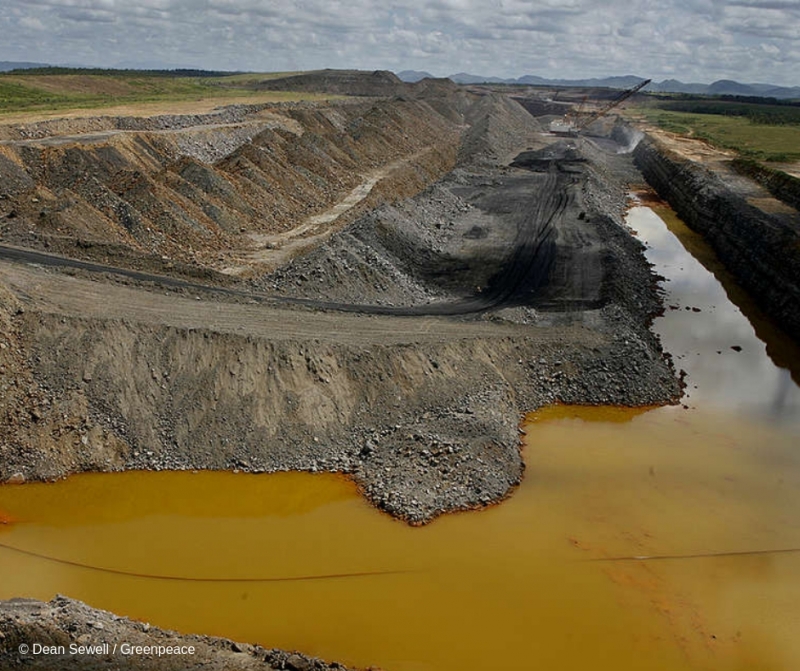 Last year, the city of Cape Town narrowly averted day zero – the day the city’s water taps would run dry. Many of the city’s four million residents patiently joined lines to receive their water ration, as the city desperately worked to restrict water usage in the weeks leading up to day zero.

While for some Capetonians, water rationing was something to adjust to, many residents and communities around the world have already been living day zero. Worldwide, half a billion people experience severe water scarcity 365 days out of the year.

There are many reasons for the global water crisis, and coal is one of them. In addition to polluting the air we breathe, it contaminates groundwater, pollutes streams and rivers, and is the single-biggest driver behind climate change.

From mining to combustion, coal depletes water resources at nearly every step of the process. Its devastating impact is visible worldwide.

Coal mining, washing and burning all release toxic chemicals and heavy metals into the environment, by the truckload. For every tonne of coal mined, between 1 and 2.5 cubic meters of groundwater is made unusable.

A Greenpeace investigation found that almost half of the rivers in Indonesia’s South Kalimantan province are at risk from coal mining activities. These activities include open-cast mines, which can cause permanent damage to rivers and aquifers.

Even after coal mines are closed, they continue to be a source of acidic runoff, often tainted with toxic heavy metals like cadmium and cobalt. The acidity kills fish and other wildlife, and heavy metals from runoff accumulate in the bodies of animals that drink the water.

In addition, hazardous coal ash can coat crops in toxic chemicals, leach into groundwater and streams, and be transported hundreds of kilometers by strong winds. At some sites, wastewater from coal-fired power plants remains poorly treated, pouring a dangerous mix of carcinogens into the environment.

A 500 MW coal-fired power plant with once-through cooling uses enough water to drain an Olympic swimming pool every three minutes. This is water that could instead be used for agriculture, drinking, and cooking.

During a severe drought in northeast India, millions of cubic meters of water that could have gone to crop irrigation and drinking water were instead diverted to coal-fired power plants.

A Greenpeace report revealed that India’s government continued to build coal-fired power plants in areas facing water stress, worsening the crisis. Likewise in coal-rich northern China, massive coal bases are sucking up precious water resources, and nearby residents have reported wells running dry. In 2013, residents living near one coal-to-chemical project said that it was no longer possible to grow crops in the area due to sinking water levels.
“All the trees around here have already died. The grasslands have turned into deserts, and the dunes are expanding.”

Coal is the single-biggest driver of climate change and was responsible for 40% of global fossil CO2 emissions in 2017.

While Australia has always experienced droughts, climate change is making them worse, and coal has a lot to do with this too.

In 2018, Australia experienced one of the worst droughts in its history. A quarter of the continent was drought declared in the second half of the year and rainfall levels in many areas dropped to record lows. In early 2019, following the extended drought, a stretch of river dried up, killing a million fish.

As the driest continent on Earth apart from Antarctica, Australia is extremely vulnerable to increasing droughts and bushfires, yet the coal industry drains over a hundred billion litres of water per year.

But there is a solution.

The good news is that clean energy sources like solar and wind require very little water, and are increasingly cheaper than coal.

On a global scale, the problem is not whether there is enough water. It is about how water resources are managed and whether they are equitably distributed. There are many alternatives to fossil fuels, but for humans, there is no alternative to water.