Who is insured by the PZU Group? Insurance companies faced with pandemic, crisis and energy transition

At the beginning of 2020 Moody’s rating agency gave a positive assessment of the decisions by insurance companies to limit underwriting and investment in the coal sector. The present pandemic has deepened the coal sector problems and, additionally it has reduced its attractiveness to the biggest global insurance and reinsurance companies. Will the PZU Group grab the opportunity and stop investing in and underwriting of  the sector that is deepening the climate and water crisis in Poland? How determined will the PZU employees be to convince the company’s management to introduce the necessary changes?

The coronavirus pandemic has drawn attention of the worldwide public opinion. During the last months the most important international and financial institutions have changed their economic growth forecasts for Poland for 2020. Instead of the predicted economic growth (smaller than in 2019, but still solid), at present, a 3 percent decrease in gross domestic product is being envisioned. Also, what changed completely is the international economic context of Poland, the situation of the country's most important trading partners from the euro zone, and also the perspectives of whole economic sectors. The energy sector and thermal coal mining are not an exception.

Decrease in economic activity translates in decreased electricity demand and as a result less demand for coal.

Due to the ownership structure of the Polish energy and finance sector weaker energy demand is quickly  reflected in the financial results. It will increase the challenges faced by the national insurance industry amid the deepening economic crisis.

Poland with no domestic reinsurance capacity

Poland is a relatively small country, not only when it comes to the country's population or territory, but also regarding the size of its financial market. Even much smaller countries have financial institutions which have at their disposal much bigger financial assets.

Insurance and reinsurance companies form a group of institutional investors that is the second biggest owner, on a global scale, of financial resources (after pension funds).

None of the biggest 20 reinsurance companies has their headquarters in Poland.What is more, the reinsurance market is highly concentrated and 20% of the biggest entities receive more than 90% of global premiums.  Risk reinsurance is necessary for underwriting the biggest investments and when natural catastrophes such as hurricanes , floods, fires, earthquakes and prolonged droughts damage important parts of the local economy.

Due to the rising costs of natural catastrophes and social pressure by civil society from 2017 the world's biggest insurance and reinsurance companies started to restrict their investments in coal utilities and miners.

They are also excluding or significantly limiting underwriting of  new coal projects, as well as  companies that are heavily-dependent on electricity production based on coal and on coal mining. Limiting the ability of the Polish coal sector to find insurance is a factor which will significantly speed up the low-emission transition in Poland, a fact that is already discussed by Polish energy companies in their financial reports.

Coal combustion is one of the main sources of greenhouse gases emissions. Increase in their concentration is causing a warming of the planet’s surface, the consequence of which is the already visible climate crisis. One of its most distinctive effects is an increase in the frequency of appearance and force of natural catastrophes. The second, painfully experienced by us today, is the extension of the higher incidence of infectious diseases. What is more, increase of temperature causes a release of viruses unknown to humanity, frozen until now in glaciers and permafrost. And it is exactly reinsurance of natural catastrophes – such as wildfires in Australia or California, typhoons in Japan or hurricanes devastating the Caribbean and the USA – that weighs down on the results of the biggest reinsurance companies in the world.

Today, no one needs an explanation of how a virus invisible to a naked eye may, within a couple of months, upset the global economy.

The real test, not only for the insurance companies, but also for the reinsurance undertakings, will be an accumulation of a couple of concurring unpredicted cataclysms, together with a prolonged economic slowdown.

Obviously, a coronavirus pandemic won’t reduce the risk of appearance of natural catastrophes in the nearest future. And the constant increase in the Earth’s average temperature is expanding its blast radius. For Poland fires in Biebrza National Park or droughts which cripple crop yields are one reminder that Central Europe is not immune to climate crisis.

The rate of adoption of policies that restrict underwriting of coal projects and companies is accelerating from year to year. In 2017, 3 entities adopted such policies and in 2018, 4 new entities joined the club, whereas in 2019 as many as 12 entities declared that they would end or limit ensuring and reinsuring coal risks. New and updated policies have also been adopted in 2020. 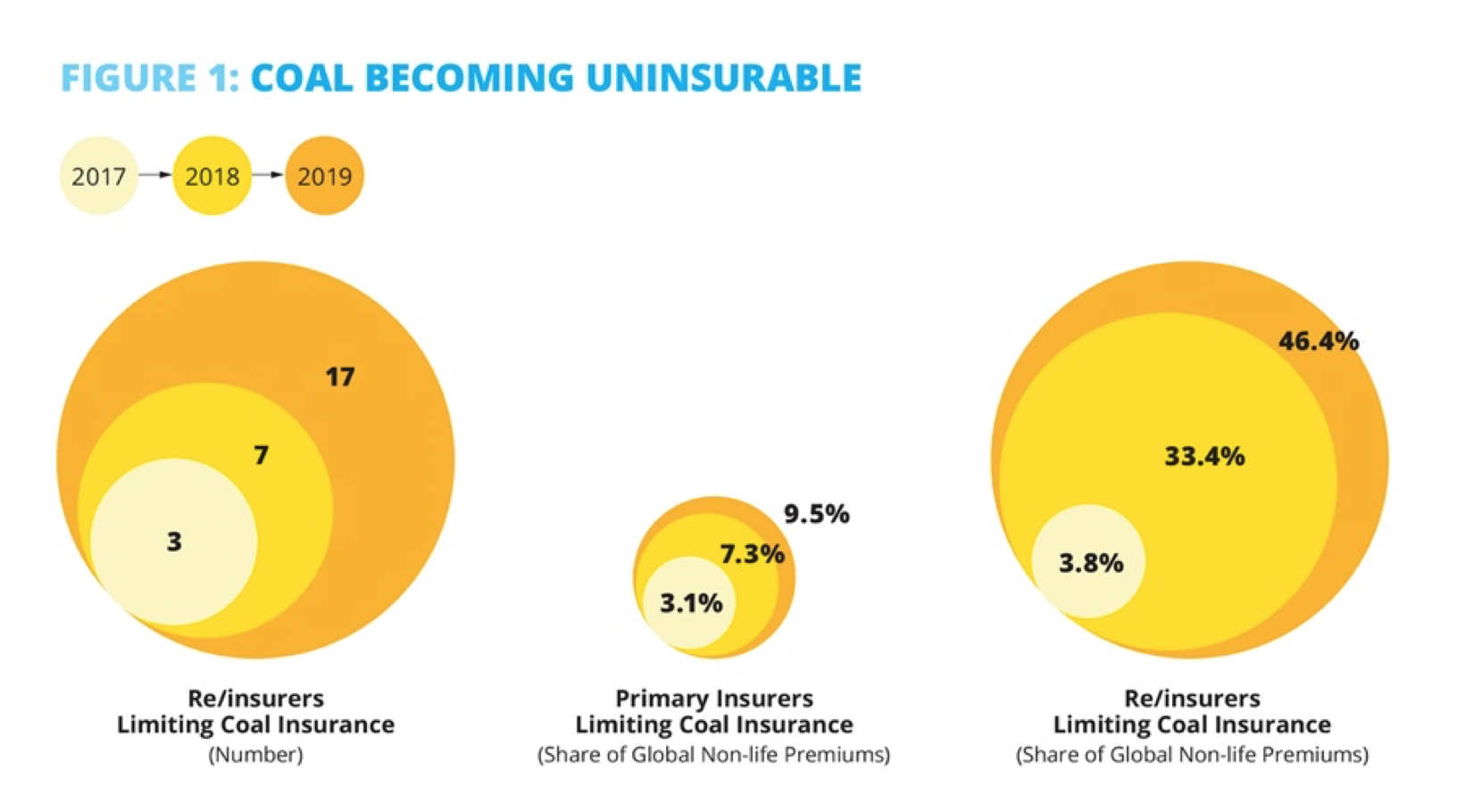 Last year was record-breaking when it comes to the number of policies limiting financing or underwriting of the coal sector. As many as 45% of policies adopted or tightened up in 2019 were those adopted precisely by insurance and reinsurance companies. What is more, while during the first two years these were mainly European insurance and reinsurance companies that limited coal investments and underwriting, in 2019 three biggest insurance companies in Australia and four from the USA joined the club. Among them, were such giants as Chubb and Liberty Mutual. The last two American insurance companies informed about the change in attitude towards coal in December 2019. The latest policy announcement came from the U.S. when the second biggest life insurer in North America adopted coal and tar sands investment restrictions. Before that Nationale Nederlanden announced a coal policy in June and  German insurance giant, Allianz, updated its coal policy in April 2020. 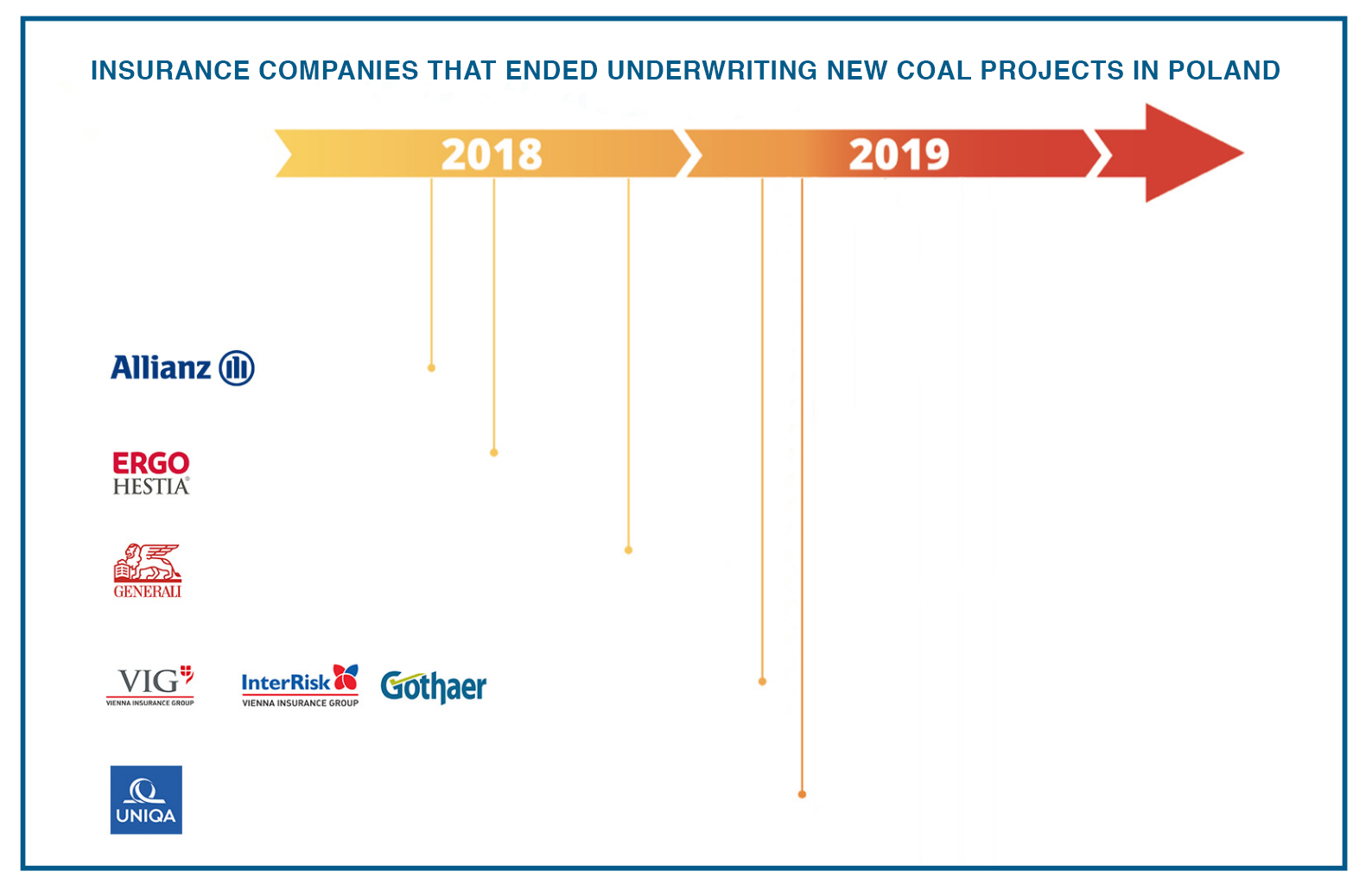 The PZU group is the only insurance company in Poland that doesn’t have any criteria limiting underwriting of and investment  in coal companies. Not even new coal projects underwriting is restricted.  All that  in spite of campaigns run by PZU  such as #10yearslonger promoting physical activity and healthy lifestyle.

As evidenced recently by Reclaim Finance in the Coal Policy Tool PZU together with the U.K. Llloyd's insurance market are the two last insurers without any coal underwriting restrictions. On top PZU doesn't even have any coal investment criteria.

When will PZU adapt to the climate crisis reality?

Coronavirus pandemic and drastic drop in oil prices have led to the situation, described by Mark Carney - until recently the Governor of Bank of England – as the Minsky moment.

Values of assets of coal  companies as well as of other fossil fuel companies have dropped. At the same time, insurance companies were and are still being forced to pay compensation to sectors affected directly and indirectly by effects of the global pandemic in response to the development of pandemic in Poland.

At the beginning of 2019  Moody’s rating agency positively assessed decisions to limit underwriting of and investment in the coal sector. The present pandemic has already deepened and will further continue to deepen problems of the Polish coal sector. It will additionally reduce its attractiveness to the biggest global insurance and reinsurance companies. Will PZU Group grab the opportunity and stop investing in and underwriting  a sector that is deepening the climate and water crisis in Poland? How determined will the PZU employees be to convince the company’s management to introduce the necessary changes? The answer to these questions will most likely be known before 2020 ends.